A few months ago, I got a new smart phone that had a bigger screen and a different operating system. For a while, I was annoyed that I made so many typos when texting and emailing, but now I’m completely competent with my new phone! It even feels strange to use the old one. In neuroscience, an experience like this is called synaptic plasticity, which refers to the brain’s ability to change as a result of experience.

As Juan noted in his latest post, your brain really is a lot like a sponge. It is flexible and often changes the strength of its neural connections and networks. The more you use a particular neural network, the stronger it becomes because you are reinforcing that connection. For example, as I familiarize myself with my new cell phone, I reinforce the neural circuits that require me to become faster and an expert at it. Long-term potentiation (LTP) is a long-lasting increase in synaptic efficacy, and it demonstrates the underlying cellular mechanism of learning and memory. Let’s look into the mechanisms of (LTP) at a single synapseConnections between neurons where a signal is passed from on.... As Juan discussed, NMDA receptors and AMPA receptors are the major players for controlling synaptic plasticity and memory functions in the hippocampusStructure in temporal lobe that has many functions but is es.... Although both receptors are permeable to sodium (Na+) and potassium (K+) ions, NMDA receptors have two distinct features. First, the pore of NMDA receptor channels is blocked by magnesium (Mg2+) ions, which can only be released when the postsynaptic cell is sufficiently depolarized (i.e. the amount of positive charges inside the cell increases). Second, NMDA receptors are permeable to Ca2+ ions in addition to Na+ and K+ ions. When glutamateThe principal excitatory neurotransmitter in the nervous sys... is released from the presynaptic terminal and binds to NMDA and AMPA receptors, Na+ and K+ ions will only be allowed to pass through AMPA receptors because of the Mg2+ block in the NMDA receptor channel. The postsynaptic cell membrane depolarizes as the Na+ and K+ ions enter the cell via AMPA receptors. Eventually, it is sufficiently depolarized, and the NMDA Mg2+block is relieved. Only then can Na+, K+, and Ca2+ enter the channels.

Calcium acts as a second messenger, activating several intracellular signaling cascades, one of which phosphorylates (adds a phosphate to) AMPA receptors, thus facilitating the conductance of AMPA receptors (allowing more ions to enter). Another intracellular signaling cascade acts to recruit additional AMPA receptors to the postsynaptic membrane, thereby creating a larger postsynaptic dendritic spine with an enhanced synaptic strength. A synapse that has already been strengthened will respond faster to a presynaptic glutamate release, opening a greater number of AMPA receptor channels, which allows NMDA receptors to open sooner and calcium to activate its cascades soon, so that the neural connection will be activated even more rapidly. Synaptic plasticity is an amazing phenomenon, rendering us able to program and change our brains to master a new skill, adapt to different environments, and — yes — even navigate our smartphones smoothly. People often say that “practice makes perfect.” Whether it’s working on math skills or during basketball practice, the enhanced communication between two neurons through LTP enables us to specialize and become experts. Rather than being a static structure, our brains change throughout our lives, allowing us to constantly learn and adapt. 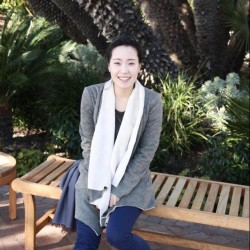 Jooyeun Lee
Jooyeun (JL) dreamt about being an artist and yet she is now in her fifth year as a Neuroscience Ph.D. student at USC.As she studied art in college, it opened up a whole new world beyond her perspective and turned out earning a Bachelor’s degree in Biology.Thereafter, she joined a neuroscience lab at California State University, Northridge, studying wound healing response in diabetic neuropathy as her Master’s thesis project.Currently, she studies neurological disorders, such as Down syndrome and Alzheimer’s disease, using Drosophila as a model system.

What Is Consciousness? [Podcast Collaboration]

13 thoughts on “LTP: When Neurons Make a Long-term Commitment”