“Do you know what you did yesterday?” asks the doctor.

“How about this morning?”

“I don’t even remember that.”

“Could you tell me what you had for lunch today?”

“What do you think you’ll do tomorrow?” asks the doctor.

“Whatever is beneficial,” responds the patient.

Henry Molaison, known to the world as Patient H.M., is perhaps the best-known patient in the history of neuroscience.  His severe amnesia and memory impairments were studied for more than 50 years, helping to establish many of the fundamental principles of memory formation and maintenance in the brain.

When Henry was a young man, he suffered from severe epilepsyA nervous system disorder that causes seizures due to abnorm..., and in an effort to increase his quality of life, his doctors decided to remove the problematic areas of his brain, specifically portions of both medial temporal lobes, which include the hippocampusStructure in temporal lobe that has many functions but is es..., amygdalaA collection of nuclei found in the temporal lobe. The amygd..., and adjacent parahippocampal gyrus.  The results of this highly experimental surgery were successful in that it significantly reduced the number of seizures Henry experienced, but it did have unexpected consequences on his behavior: Henry could not form new memories.  Henry’s amnesia was quite profound.  Henry could not remember his life during the last two years before the surgery, but the rest of his autobiographical or episodic memories of his childhood remained intact.  Strikingly, Henry would forget with whom he was speaking after just a few minutes of conversation.  For Henry, it was as if time had stopped when he was 25, but he knew that something was wrong and described his state as “like waking from a dream.” 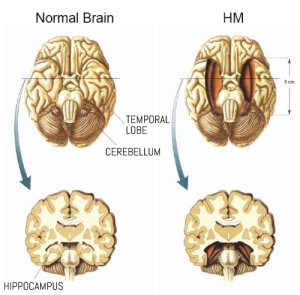 Despite these memory deficits, however, Henry’s intellectual abilities and personality were unchanged.  Moreover, only certain types of memory functions were disrupted by the surgery.  For example, his doctor would ask Henry to draw a line between two outlines of a five-pointed star while watching his hand and the page in a mirror, a difficult task for a novice.  Even though he was not conscious of having done this task before, Henry got better and better each time he did it.  Clearly, Henry could learn new motor skills by repeated practice, even without having any recollection of doing the task in the past!  In other words, his motor learning and procedural memory remained intact.

Careful analysis of Henry’s post-surgical changes accelerated our understanding of the brain.  At the time of his surgery, it was thought that memory function was spread throughout the brain.  This theory was promptly reassessed: Henry’s surgery provided the first definitive evidences that episodic memory is a distinct cerebral function, separate from other cognitive functions such as general intelligence and motor learning, and identified the medial temporal lobe as important for memory.

Henry truly gave himself to science.  After his death in 2008, his brain was frozen and scientists at the Brain Observatory at the University of California, San Diego sliced it into 2,400 paper-thin pieces that were imaged and digitally recombined to form a 3D model of Henry’s brain.  More than 50 years after this surgery, these images showed that there was still a surprisingly large amount of hippocampus left intact!  Moreover, other anatomical regions not explicitly targeted by the surgery were incidentally removed, suggesting that these regions, in addition to the hippocampus, are important for memory.  In particular, the entorhinal cortex—a relay station between the hippocampus and the rest of the brain—was completely removed from Henry’s brain, raising the possibility that this region played a significant role in Henry’s memory deficits.

“The study of H. M. […] stands as one of the great milestones in the history of modern neuroscience,” said Dr. Eric Kandel a neuroscientist at Columbia University.  “It opened the way for the study of the two memory systems in the brain, explicit and implicit, and provided the basis for everything that came later — the study of human memory and its disorders.”

Squire, Larry R. “The Legacy of Patient H.M. for Neuroscience.” NeuronThe functional unit of the nervous system, a nerve cell that...: 6-9.

Images adapted from Wikipedia and clinicalpsychreading.blogspot.com.

Language: Your Connection to Others