You have a gift.

Who is it from?

Mr. Scrooge frowns. He turns the box around. The label reads:

HAVING A BLUE CHRISTMAS? WRINKLES ON YOUR FACE? HERE’S A CHRISTMAS GIFT FOR YOU—BOTULINUM NEUROTOXIN!

Dear reader, you must have frozen there too! Calling botulinum neurotoxin a gift? Isn’t it the deadliest toxin ever found? You are spot on.

Centers for Disease Control and Prevention lists botulinum toxin as a Category A biological weapon agent, alongside anthrax and the plague. Its uses as a bioweapon by war criminals and terrorists have been identified as some of the darkest chapters of human history. In World War II, the Japanese biological warfare group called Unit 731 horrifically poisoned prisoners in their biomedical experiment facilities in Manchuria China with neurotoxins. After the 1991 Gulf War, Iraq admitted to producing 19,000 liters of concentrated botulinum toxin. It is estimated that if this volume were inhaled, it would be enough to wipe out the entire human race three times.

What is botulinum toxin and what makes it so deadly?

Botulinum toxin is not a man-made substance. You might be surprised to learn that it is naturally produced by bacteria, called Clostridium botulinum, whose spores can be found all over the place: in the forest, along the shoreline, everywhere! These spores are usually harmless. But after they mature under low-oxygen conditions, they produce botulinum toxin–and that’s a problem.

Botulinum toxin exerts its effects by destroying proteins that are essential for proper nerve action. More specifically, botulinum toxin binds to nerves that use the neurotransmitterChemicals that cross some synapses and carry a signal to the... acetylcholine. This is the neurotransmitter that motor neurons release to activate muscles at specialized synapses called neuromuscular junctions. When botulinum toxin binds to acetylcholinergic neurons, it is taken up by the cell in a process called endocytosis. Once inside the cell, the botulinum toxin breaks apart components of the SNARE complex, thus crippling the cell’s ability to release neurotransmitter. Without acetylcholine release, there is no signal to the muscles to contract. This results in an illness known as botulism, whose symptoms include muscle weakness, droopy eyes, paralysis, and eventually respiratory failure.

In 1820, a German doctor named Justinus Kerner described what we now know to be botulism after a number of people who had eaten undercooked sausage became ill. He simply called it “sausage poison,” but later in 1895, a similar tragedy occured after people ate spoiled ham. This time a bacterial specialist, Professor Emile Pierre van Ermengem, identified the pathogen, and named it after the Latin word for sausage, botolus. In these cases, botulism — the neuroparalytic illness caused by the neurotoxin produced by Clostridium botulinum — was foodborne. Once inside the body, the bacteria develop in the intestines and produce the neurotoxin, resulting in botulism.

“…botulinum toxin isn’t completely “evil” and may even be very beneficial.”

An important note about botulism is that patients afflicted with it are paralyzed yet conscious. Their mental abilities remain intact but their muscles fail to work… like a living nightmare.

Is there a cure for botulism?

Botulinum toxin starts to disrupt neural function anytime between two and five days, and its effects are irreversible. Luckily, neurons actively form new synapses onto the muscle, so there is hope! The process of forming new synaptic connections in very slow, and it usually takes two to three months for patients to regain motor control. Often, patients need respiratory facilities to assist breathing until the effects of the neurotoxin are minimal.

One way to treat botulism is to inject botulinum antitoxin. The antitoxin treatment is much more efficient and effective when it is given early. However, botulism diagnosis is a complicated and time-consuming procedure, and misdiagnosis for other nerves system diseases with similar symptoms often happens before botulism is properly diagnosed.

Why don’t we just wipe out Clostridium botulinum?

Turns out botulinum toxin isn’t completely “evil” and may even be very beneficial.

Early in the 1970s, Dr. Alan B. Scott studied the then-named drug Oculinum on its effect in treating crossed-eye disorder. FDA approved the medical use in 1989. In 1991, Allergan bought oculinum and renamed it to Botox, aiming at the market of 4% of the American population who have crossed-eyes. Then, in 1998, Allergan observed Botox’s potential in wrinkle smoothening and decided to investigate. Just four years later, the FDA gave the green light to Botox’s use in wrinkle reduction. Allergan’s sales increased almost 30-fold. In 2013, the FDA approved it for treating overactive bladder.

In 2000, a Beverly Hills cosmetic surgeon found that his patients who received Botox reported fewer headaches. This opened the revenue of exploring Botox’s potential in treating migraines. In the US, doctors are allowed to prescribe FDA-approved drugs for “off-label” uses if the potential benefits outweigh the risks. To that end, Botox has been used to treat over 793 medical conditions aside from wrinkle smoothening, including chronic migraines, excessive underarm sweating, premature ejaculation, and severe neck spasms. Currently, Allergan has ongoing clinical trials for Botox as a possible treatment for depression.

Botox is the darling of off-label use to many doctors. Allergan, without a doubt, is the front-runner and primary advocate of exploring the potential benefits that Botox can bring to patients. Like Santa’s inventive helper, this pharma company keeps wrapping new gifts from the most dangerous toxin and informing the world of their astonishing new findings.

Is Botox really the wonder drug to treat all ailments? Let’s wait and see.

Now, what advice will you give to Mr. Scrooge? Trade paralyzed smiles for a wrinkle-free face? Take it as a happy pill so he can enjoy Christmas? Or leave the gift alone? 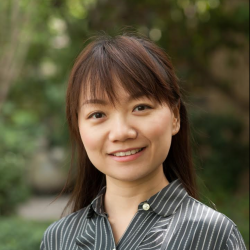 Lining earned her Ph.D. from Clemson University, where she studied natural killer cell-based immunotherapy. She also established a mouse model recapitulating Kaposi’s sarcoma while working at the University of Southern California. Her current research at the City of Hope focuses on developing ultra-sensitive biosensors for detecting botulinum toxins. Outside the lab, she serves as the VP of Communications at the Association for Women in Science Los Angeles/Ventura County chapter. She is obsessed with giving speeches at Toastmasters and loves to explore nature in the National Parks.

Lining earned her Ph.D. from Clemson University, where she studied natural killer cell-based immunotherapy. She also established a mouse model recapitulating Kaposi’s sarcoma while working at the University of Southern California. Her current research at the City of Hope focuses on developing ultra-sensitive biosensors for detecting botulinum toxins. Outside the lab, she serves as the VP of Communications at the Association for Women in Science Los Angeles/Ventura County chapter. She is obsessed with giving speeches at Toastmasters and loves to explore nature in the National Parks.

The Turing Test: Is that Human or Machine?

How Do We Know? The Value of Scientific Models.