The brain has an amazing ability to form internal maps of the world around it.  Knowing Neurons has previously written several articles about place cells in the hippocampus and how these neurons form internal maps of the world.  Think of it as thousands of neurons forming their own version of Google Maps inside your brain.  Until recently, most of what neuroscientists knew about how neurons mapped the world came from research in two-dimensional space.  Neurona activity in the hippocampus is normally recorded while the animal is walking around a two-dimensional arena.  As the rat meanders around the arena, a handful of neurons become activated in specific regions of the maze.  Eventually the rat explores the whole maze, and the entire arena is mapped out in the brain by overlapping neuronal activity.  But we live in a three-dimensional world!  Does the brain map space in 3D?

In an article published in the journal Science last year, neuroscientists at the Weizmann Institute of Science in Israel showed that hippocampal neurons were also able to form maps of 3D space!  The researchers recorded the activity of hippocampal neurons in Egyptian fruit bats while they flew around large arenas gathering fruit.  They carefully attached tiny computers with radio transmitters to the bats, so the hippocampal neural activity could be recorded while the bats flew freely around the space.  This alone was quite a feat of engineering!  The researchers monitored the activity of hippocampal neurons to see if any of them became more active when the bat flew through discrete areas.  Similar to what was seen previously in rats walking around 2D arenas, the researchers identified neurons that were activated in discrete regions of 3D space!  The cartoon below shows the flight path of the fruit bat as it explores the room; the cluster of red dots shows a single place cell that became activated when the bat flew through a specific volume of the arena. 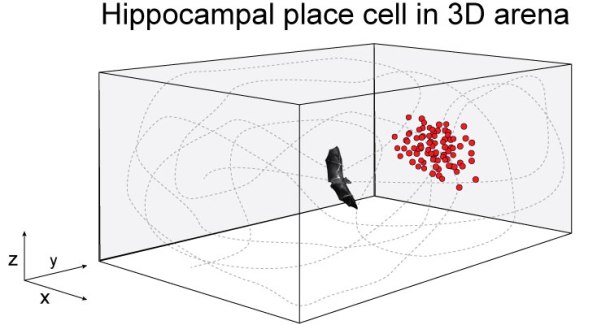 When enough 3D place cells were recorded, the researchers found that hippocampal 3D place cells map out the whole arena volume!  In the gif below, we show a cartoon of the bat flying through the 3D arena, while place cells become activated when the bat flies through “place volumes.”

The researchers then asked what the shape of the place volumes was. In a 3D volume, the place fields could be shaped like cubes, triangles, ellipses, spheres or any number of 3D shapes.  Surprisingly, the researchers found that each place cell encoded a volume of space that was totally spherical!  This meant that the whole arena was mapped out by spherical place volumes, similar to the way that gumballs fill up the space of a gumball machine. 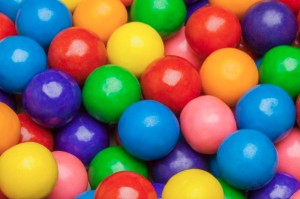 This study definitively showed that animals that must navigate accurately in 3D volumes do in fact form internal 3D maps of the external world within their hippocampi!  Although the discovery was not unexpected, it did provide more proof to neuroscientists’ working hypothesis of how the brain processes the world around it!

Images by Ryan T. Jones and from Bryan Mullennix/Tetra Images/Corbis.

Getting Technical: Methods in Neuroscience